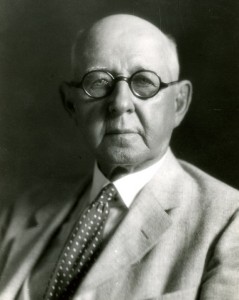 If you learn nothing else about Julius Stone, know that he laughed often, learned much, and shared both of these gifts with everyone he knew. He is also a wonderful example of the American archetype of the self-made man who tries to give back as much as he gets.

That was certainly true with his support of the University. He purchased Gilbraltar Island on Lake Erie and donated it to Ohio State to support the marine research conducted there by OSU faculty and students. He served two terms on the Board of Trustees for a total of 20 years. Even in small ways, his support had a long-lasting effect: He convinced a New York financier to build an observatory on OSU’s grounds. 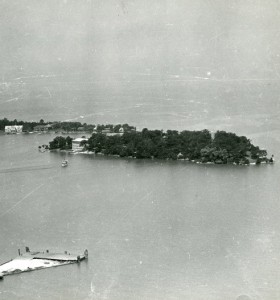 Stone was born on June 1, 1855, on a farm in Michigan to emigrant parents. As one of eleven children, though, Stone did his part to support the family. Julius left school at 13, working first for a grain purchaser. By the age of 16, he was a telegrapher for the railroad. He then worked in the coal industry and focused on manufacturing sometime around the turn of the century.

Besides having a great aptitude for business, Julius Stone also possessed both a keen scientific mind and a desire for adventure.  He was a fellow of the American Geographical Society, the Explorer’s Club of New York, and the Royal Astronomical Society in England. He lectured on astronomy and geology frequently. He traveled all over the globe, from the Galapagos Islands, to South Africa. He led the first major expedition through the Grand Canyon, and he went white-water rafting when he was 84 years old. 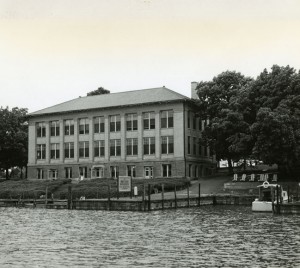 He was also an ardent philanthropist, although most of his work went unknown until his death. For the most part only he and his personal staff knew which charities he was supporting and how much he was giving. One of the few occasions on which he was publicly recognized was at the dedication in 1925 of the Franz Theodore Stone Laboratory on Gibraltar Island in Lake Erie. The lab was named for Stone’s father, after Stone purchased the island for the University.

Before the purchase, the fresh-water research institute was housed in temporary quarters on Put-in-Bay. OSU Zoology Prof. Raymond C. Osburn had heard that Gibraltar Island was for sale, so he wrote to Stone, then a former Board of Trustees member, what he thought of finding someone to buy the island, possibly as a memorial gift. Stone decided to buy it himself, which he did, but he had the deed made out to the university before he received the deed from the seller, then handed both over to Osburn. Stone Lab is now the oldest freshwater biological field station in the United States. 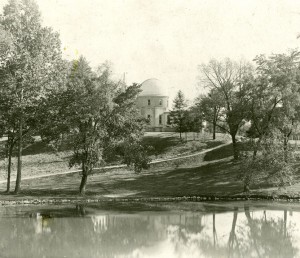 Long before he bought Gilbraltar Island, Stone was having dinner in New York one evening and struck up a conversation with Emerson McMillin, a New York financier. They both shared a love of astronomy, and when McMillin mentioned he’d like to build an observatory, Stone told him of the perfect place: Ohio State. So McMillin donated $10,000 to the University to build the observatory, which opened in 1895 near the Faculty Club. Before construction began, McMillin gave another $5,000 to beautify the area around the observatory, including Mirror Lake. Good thing he did: the University had been pondering laying a new road right through the Mirror Lake area. If Stone hadn’t convinced McMillin to build the observatory at OSU, who knows what the area might look like today.

Stone died on July 25, 1947, at the age of 92. According to the Columbus Dispatch, Stone instructed before he died that postcards to be mailed out on the day of his death. On the front was a picture of a snuffed-out candle; on the back was the following poem:

With a ripple of merry laughter,

A smile and a gay goodbye

To all who made life worth living;

Back to the dust go I

Long Gone Campus Traditions: Hats off to the era of freshman beanies!

August 9, 2013 / drobik.5@osu.edu / Comments Off on Long Gone Campus Traditions: Hats off to the era of freshman beanies! 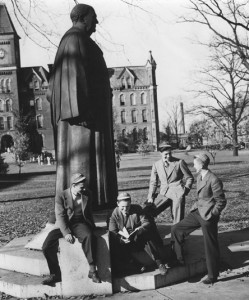 Perhaps one of the few Ohio State traditions new students may wish to stay buried is the class cap, otherwise known as the ‘beanie.’ Freshmen (men only) used to be strong-armed into wearing caps in the name of creating school spirit and class unity. If by unity the administration meant commiseration, well then they got what they set out to achieve.

The caps and rules were in use from 1912 until the mid-century. Wearing the caps was just one of the rules enforced by “all men of the upper classes;” however, the junior men’s honorary Bucket and Dipper and its members were the only people ever authorized, by the Student Senate and the President of the University, to carry out the traditional punishment: namely, throwing offenders into Mirror Lake. Ironically, if some unauthorized person attempted to chuck a freshman in the lake, Bucket and Dipper members were honor-bound to protect the freshman. 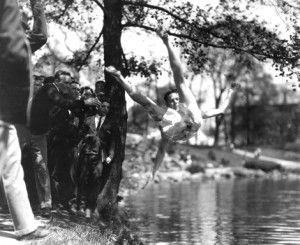 A freshman is tossed into Mirror Lake, 1926

Freshmen men were thus required to wear the caps from Freshman Week at the beginning of the term, until Cap Bonfire on Tradition Day, in June. Students caught without their beanies, or violating one of the freshmen rules, were punished. As one Alumni Monthly article put it, “Irregular meetings of Bucket and Dipper are held when freshmen are chased from the Long Walk and from the steps of University or Derby Hall.” These meetings convened on the edge of Mirror Lake and ended with the offending freshmen taking a swim. Other rules that could earn a dunking: skipping Chapel (which was mandatory until 1926), doing something to offend an upper classman (such as the freshman who posted signs saying “Bucket and Dipper go to Hell” near the Long Walk), or setting foot on the Long Walk.

As for Bucket and Dipper, the 14 members at that time were all junior men and had been chosen for their leadership, scholarship and service. Such greats as Chic Harley and Milt Caniff were members. During their initiation, members were thrown in Mirror Lake, so perhaps they had the prerequisite experience needed. 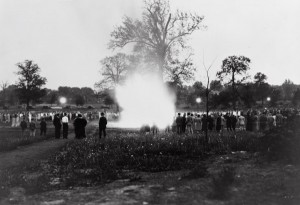 Thus, in June the freshman waged a two-day war on Bucket and Dipper. The “war” usually consisted on a tug-of-war across Mirror Lake—where the freshman consistently ended up in the lake. That night, students would gather for the Cap Bonfire, when some freshman opted to burn their beanies. (Many freshman did keep their beanies as a memento of their servitude.) Following the bonfire, many freshmen (again, ladies were excluded) went for a walk in their shirttails to cause a ruckus outside the home of then-OSU President William Oxley Thompson.

In 1926 Bucket and Dipper attempted to delay the burning; in the melee that followed, 103 freshman were thrown in the lake and the police were called. Ironically, it was a policeman that gave a freshman a concussion, not a trip into the lake. The following year, then-OSU President George Rightmire forbade Bucket and Dipper from dunking anyone, deserved or not. From then on, it seems the Bucket and Dipper initiates were the only ones to go swimming.

As for the caps themselves, fashion in hats changed rather rapidly. Some prime examples from Ohio State include the “peanut-shaped skull cap,” “knitted toboggan” cap or “jockey-style” cap, or one with a “rolled brim topped with a scarlet button.”

To learn more about the tradition of freshmen beanies at OSU and other Big Ten universities, visit our web exhibit, “Beanies of the Big 10” at http://library.osu.edu/projects/beanies/.

May 16, 2013 / drobik.5@osu.edu / Comments Off on Long Gone CampusTraditions: Classes tug for dominance in war across Mirror Lake 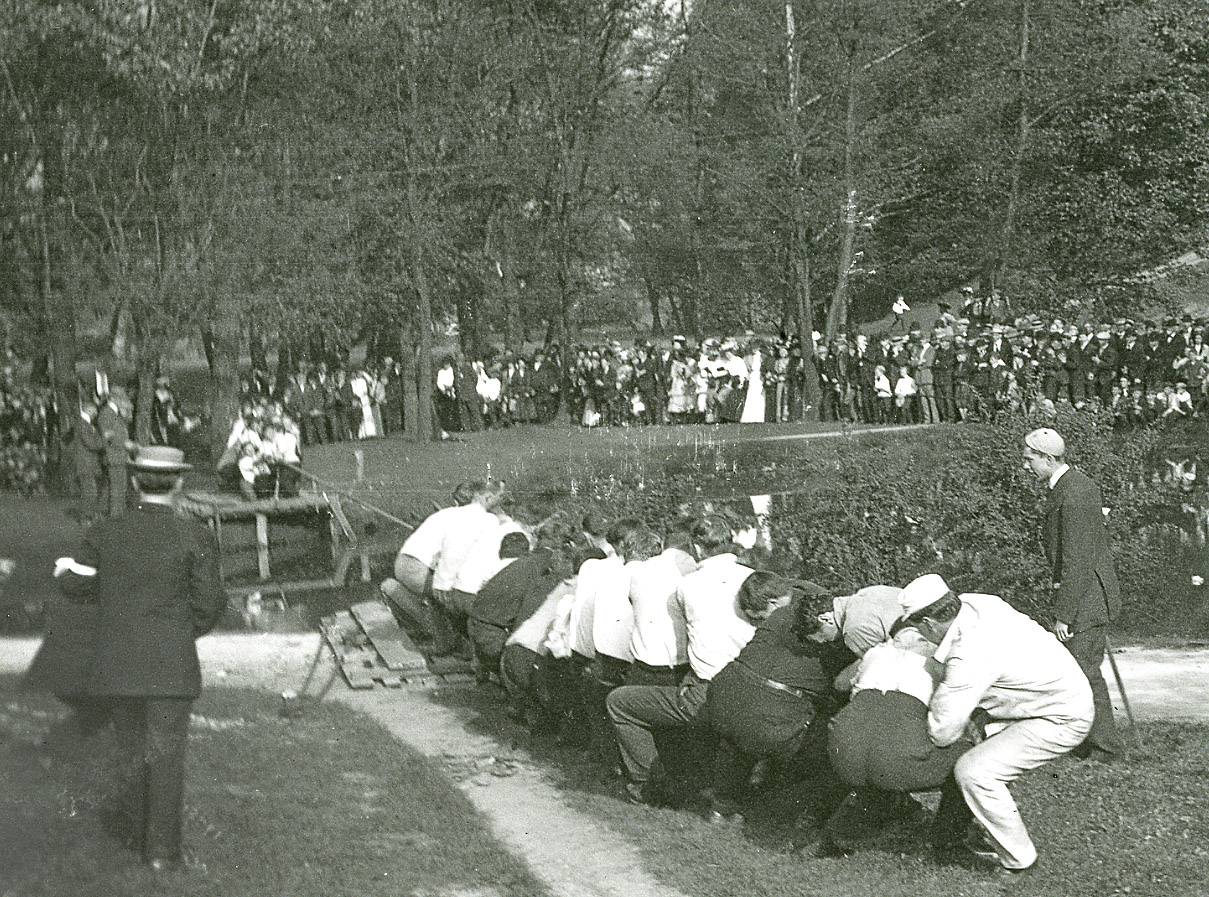 (Today we begin a summer blog series titled “Long Gone Campus Traditions”.  In these posts we’ll explore some of the more unusual, sensational and even violent student traditions that have been obsolete from OSU’s campus for quite some time.)

Perhaps one of the best discontinued traditions is the class Tug-of-War which was held annually between the freshman and sophomore classes, mostly from around 1909 until the late 1920s. In the beginning, the spectacle was usually held on “Tradition Day”, which marked the end of the school year. A bonfire was held, when the freshman burned their beanies, and class honoraries held their initiations.  A field day and review of cadets also took place, all leading up to Commencement.

The Tug-of-War portion of the festivities was held across Mirror Lake. Freshmen would reportedly stand on one side of the lake and the Sophomores stood on the opposite bank. The University’s President kept time, and eventually one side would end up getting dragged through the water.

The event became sporadic starting in the mid-1930, but was still held as part of what had become Traditions Week after World War II. In one event in 1949, for instance, the lake was tinted with a bright green dye, so that whichever team was dragged through the water, members would “literally turn green with envy,” according to that year’s May Week chairman, Stanley Zucker.

It is unclear why the tradition eventually ended. There are no Lantern stories about it after 1949, and as early as the 1920s, University officials were not exactly pleased with the spectacle. Then-President Rightmire came down very hard in 1926 on all aspects of hazing, both between classes and within the Greek organizations, after multiple incidents ended with police intervention. 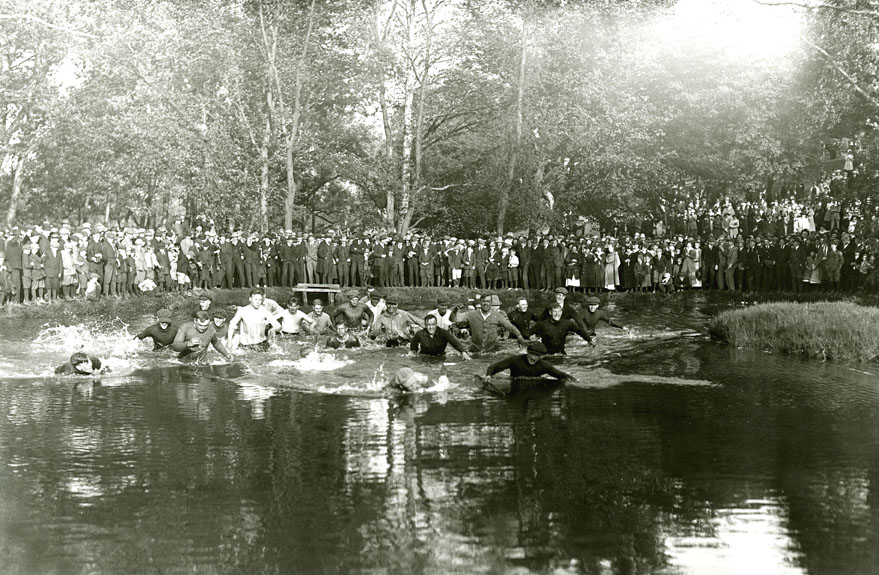