Interest in computers on campus has been quite notable ever since Ohio State acquired its first computer in 1951. 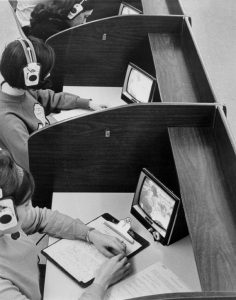 The professors at OSU have been involved in technological research and development from the earliest days of computers on campus. In 1959, an electrical engineering professor used a computer to test his newly-invented tracking system designed to vastly improve the accuracy of anti-aircraft missiles. Almost a decade later in 1967, OSU developers created a spelling-correction program that could use the computer to read over a written work and make corrections on misspelled words. The following year, Charles Csuri, a professor of fine arts, won first prize at the Fourth International Experimental Film Competition for his hummingbird computer animated film. He would later go on to become known as one of the fathers of computer animation.

Interest in computer science, however, did not exist solely among the professors. In November 1965, the University published a report on the growing popularity of computer science among the students. The year before, 1,130 students were enrolled in computer classes, 280 in non-credit seminars, and there were 231 theses and dissertations on the topic of computers. This interest led to the creation of the division of Computer and Information Science (CIS) under the College of Engineering in September 1966. OSU granted its first degrees in CIS at the end of winter quarter in 1968, and by June of that year, Computer and Information Science became its own department. 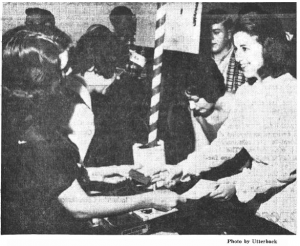 Students at the computer dance, 1964

Of course, while students were certainly interested in computers from an academic perspective, they also used them for more recreational purposes. In October 1964, the campus YMCA hosted a computer dance where the students were matched up with one another by computer after filling out questionnaires. This dance ran successfully for a few years, but after the novelty wore off, it flopped hard in April of 1967. OSU wouldn’t try matching students up with computers again until 1977, when an independent, student-run company called Computer Date Match came to campus and charged students $3.50 to be matched up with a list of other students after taking a survey.

Along with dating games, students also found another way to goof around with computers. In the 1970s, each student had a certain amount of time allotted for computer use to complete assignments. Many of them, however, would use they allotted time to play games and would then have to pay for more time to finish their schoolwork.

Computers have been contributing to culture at Ohio State for far longer than most of its students have been alive, and it is safe to imagine that they will continue to do so far into the foreseeable future.

Let’s get wired up: computers come to campus