December 4, 2017 / haire.14@osu.edu / Comments Off on OSU professor connected education to democracy and freedom

“Nobody learns what is set before him”

[Editor’s note: Recently, John Farley, who received his Ph.D. at Ohio State in 1978, donated letters written to him in response to a questionnaire he distributed that year to former associates and students of OSU Education Professor Alan F. Griffin, who taught at OSU from 1936 to 1964. Griffin was the subject of Farley’s dissertation, The Life and Thought of Alan Griffin: Exemplar of Education. The correspondence donated by Farley offers observations of a professor dedicated to the belief that education and democracy go hand in hand, and of an educator passionate about teaching his students the critical-thinking skills that would serve them beyond the classroom. Below, OSU volunteer Becca Bushman has written an account of Griffin’s work and life, based in part on Farley’s correspondence.

Alan Francis Griffin was born in 1907 in Barnesville, Ohio. His mother died of Huntington’s disease when he was only eight, at which point he and his brother John relocated to Mansfield, Ohio.

Before becoming an educator, Griffin worked in dairy and at a steel foundry. Griffin was also a radio announcer from 1927 to 1930, and from 1930 to 1932, he worked as a newspaper reporter for the Mansfield News Journal. 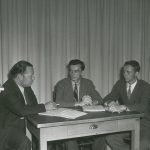 Griffin began teaching in 1929, though not originally at the college level; he worked at John Simpson Junior High School in Mansfield until 1936, when he completed his B.S. in Education at The Ohio State University and began working at Ohio State. He went on to earn a Ph.D. at OSU in 1942. He became a full professor in 1949 and remained at Ohio State until he died in 1964.

Like many of his contemporaries, Griffin subscribed to ideas on education set forth by John Dewey, an influential American educator and reformer who was a key figure in the Progressive Education movement of the early 20th century. Like Dewey, Griffin understood the relationship between education and democracy to be pivotal. His 1942 dissertation “contained central ideas about the role of reflective thought and its relationship to the survival of democracy,” and he also emphasized “the critical need for active engagement of citizens.”*

Griffin demonstrated this belief even when he was teaching junior high school where he sought to further stimulate the minds of secondary school students through his work with the Junior Town Meeting League. The League, which was sponsored by the American Education Press, organized forums and debates in which high school students could discuss salient current issues and events. Its goal was to decrease apathy and ignorance and to increase civic engagement in America’s youth.

Griffin continued his work with the League even after moving into higher education; he served as a trustee to the organization and contributed to its publications.

In any class he taught, Griffin worked to promote and provoke reflective thought in his students. Indeed, “for Griffin, no meaningful reflection could take place without the serious and persistent examination of student beliefs and values.” For him, education was about teaching his students how to think critically—he worked to make his students simultaneously more skeptical and more open-minded. Griffin was the sort of instructor to come to class with questions, not answers, according to Eugene Gilliom, Professor Emeritus of the Department of Educational Theory and Practice.*

Griffin’s approach was unstructured and casual; his lectures largely consisted of organic, collaborative discussion. Students were so enthralled by the atmosphere he created that his courses were widely audited. As James Louis Barth, who earned a Ph.D in Education in 1963, said, “It was not unusual for him to have a seminar full of people who were interested in being with him…his seminars were well attended but nobody was paying for the credit—this of course upset the University!”

Griffin also worked with students at WOSU, on a radio program called “No Corner on Democracy.” Griffin and students wrote scripts for the program, although Griffin wrote many more, according to former student Paul Gump. Griffin was able to “belt out a script late at night,” whereas it might take a student a few weeks to complete the same amount of work, Gump said in his correspondence with Farley.

Airing in the early 1940s, the program’s intent was to show how “other people in other times and places have also struggled to advance democracy,” Gump said. Griffin felt the emergence of McCarthyism threatened democratic processes, and he spoke out against it. Former student Lawrence Metcalf wrote to Farley that Griffin was “totally opposed to any form of witch hunting.” 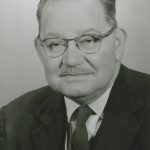 For Griffin, democratic principles did not apply to just certain segments of society, either. He and other College of Education faculty worked to integrate the OSU chapter of Phi Delta Kappa, the national education honorary society, to include both African Americans and women. The OSU chapter opposed the provision in the national constitution restricting membership to white males. After the national body amended its constitution, the OSU chapter immediately voted for the same change in early 1940. At the time, Griffin, who authored the amendment, told The Lantern that “the chapter action was taken in terms of the realization that many educators…were being lost to the organization simply because of the color of their skin.”

Griffin’s perspective demonstrates a determination to connect formal higher education to the so-called “real world.” He placed his classroom in the context of larger cultural and political phenomena, and encouraged his students to do so as well. He encouraged students to interrogate information, both on their own and with others, especially in the public arena by participating in democratic government. Griffin understood education to be less about rote memorization and to be more about learning how to think critically and reflectively, to continually question and examine assumptions. Perhaps this is what is meant by the quote cited at the beginning of the post, sent to John Farley by Katharine E. Jones. In Alan F. Griffin’s eyes, for learning to occur, people had to take initiative to become and remain actively and reflectively engaged in the classroom and in society.