May 22, 2017 / mares.12@osu.edu / Comments Off on Scrapbook provides insights to early student life 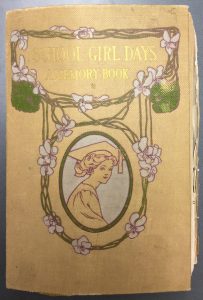 Today, college scrapbooks simply contain photos of one participating in various university events, friends hanging around on the weekends, and maybe a graduation cap tassel or diploma at the very end. However, the almost 200 page scrapbook that Esther McGinnis made to commemorate her time at the Ohio State University may not contain any photos of herself, but tells us much more. 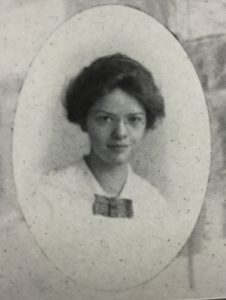 McGinnis started at Ohio State in the fall of 1911 as a Home Economics major and was actively involved throughout the Ohio State community during her undergraduate career. The journey through her scrapbook begins with the various organizations that she participated in during her four years. The Young Women’s Christian Association (Y.W.C.A.) appears to have been a major organization during McGinnis’ collegiate years. 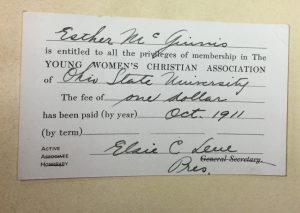 Her membership card stating her affiliation and fee of one dollar to join is one of the first items glued into the book with a news article about her appointment as treasurer. She also belonged to the Philomathean Literary Society, one of the oldest existing literary societies among universities. Her scrapbook contains her invitation to join and several invitations to attend events held by the group. Additionally, as a member of the Women’s Glee Club she cut out Lantern news articles about her acceptance and their concerts that followed. 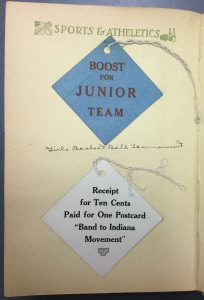 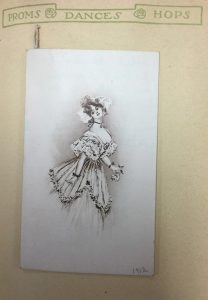 While this scrapbook is significantly dated, it is similar to today’s scrapbooks by what it contains next. The first half of the book reads like a yearbook mainly because it involves her inclusion in school activities, while the second half of the book is more about the various events she participated in outside of her organizations. One such activity is a Co-Ed prom she attended with Dorothy Griggs in 1913 at The Armory. Inside the scrapbook McGinnis attached a dance card, which lists the dances followed by the name of whomever she danced with. In addition, there are tags that were used for various athletic events around campus with captions underneath them such as, “Girls Basket Ball Tournament.” 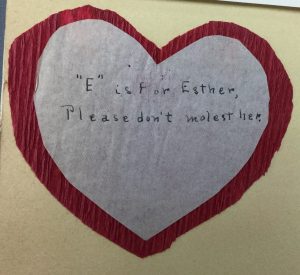 Continuing to flip through the pages will allow one to see all the parties, luncheons, plays, and concerts that McGinnis attended by means of invitations, playbills, tickets, and programs glued inside. One page we found to be interesting within the scrapbook was a cut-out heart valentine that reads “’E’ is for Esther, Please don’t molest her.” While we may not know the context behind it, this clever rhyme allows us to think about a different time in history and what the valentine could have meant to her at the time. Whether it is an inside joke among friends or a gift she received, we may never know but this is what makes the scrapbook intriguing and an asset to our collection at the archives.

The rest of McGinnis’ scrapbook is filled of news clippings about what was going on around campus. While some of these articles acknowledged her induction into an organization or her tryouts for the Glee Club, most of them were just current events or updates on individuals’ lives. Many were about new faculty and staff, engagement and event announcements, event recaps, and the occasional news clipping about Dr. Thompson; such as the Christmas greeting that he wrote in 1914. 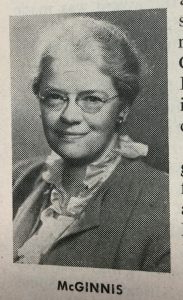 This scrapbook contains the memories and moments that Esther McGinnis wanted to remember beyond her days at Ohio State. In doing so, Esther provided the archives with an inside story of what the life of an Ohio State student was like at the beginning of the 20th century. It highlights the events that took place, what students valued and found to be of importance, and gives us the chance to learn about Ohio State from a new, fascinating perspective.

As for Esther McGinnis, she continued on to receive her master’s in nutrition at Columbia University and her Ph.D in child development at University of Minnesota, but eventually returned to the Ohio State University. In 1951, an honorary Doctor of Laws degree was granted upon her at the Ohio State University and the following year she became a professor in the Home Economics department at Ohio State. She was the member of several honorary societies within her discipline and the author of many books as well. Her scrapbook will remain in the University’s collection to allow our patrons to enjoy it as much as we have!