An escaped slave of Andrew Jackson became a beloved figure of the early university.

Washington Townsend worked at The Ohio State University for about 20 years first as a groundskeeper and then as janitor of Orton Hall, which housed the main library at the time. Townsend was once a slave at the Hermitage, a property of Andrew Jackson’s. He escaped slavery by reaching Ohio in 1860. 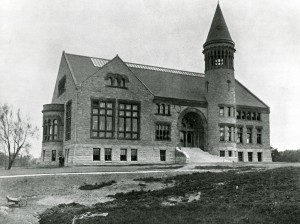 Townsend came to the University in 1885 and worked until his death in 1904. He is most remembered as having a genuine character and positive attitude. His impact on the early University community is demonstrated by tributes of both faculty and students.

According to the Alumni Magazine, Townsend’s character and service was so well known and highly esteemed by President Edward Orton that Orton’s son, Edward Orton Jr., set up a pension plan for Townsend and paid for a plot of land in the Green Lawn Cemetery when Townsend died. Townsend’s gravestone marker has a tribute to his life written by Orton Jr.

The students felt similarly that his service and presence at the University made it a better place. They mention going out of their way to pass by Townsend to say good morning and even memorialized him in the yearbook. 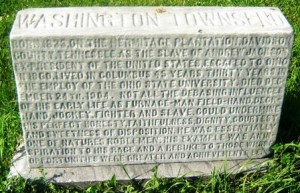 Editors of the early Makio would write plays or other literary pieces about their experience at Ohio State. In the 1897 Makio the editors wrote a poem about Townsend’s origins, loyalty to Ohio State and good cheer. They end the poem with the stanza:

Then here’s a toast to you old man.
May many years be thine,
is the wish of all your student friends
and the editors benign.

We learn from the Lantern that Washington Townsend suffered a stroke a couple years before he died. When he died on Christmas Eve 1904, several articles recognized the impression he made on campus. The reporters further said that all their names would be forgotten, but the kind words and faithful service of Washington Townsend would be preserved.

For the complete version of the student poem, view the 1897 Makio.

In memoriam: Bugno, Clarke and Edse had lasting legacies at OSU