Who is this OSU Mystery Man? A diary reveals his identity

February 23, 2015 / drobik.5@osu.edu / Comments Off on Who is this OSU Mystery Man? A diary reveals his identity 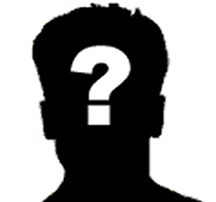 What if you diligently kept a diary during your college days, noting all of the social and intellectual ups and downs of life as a student? The people you dated, the classes you took, the places where you had fun on and off-campus, and more. That’s the kind of thing you would want to hold onto, either for future family members or just to remind you of times past.

But what if you either forgot or intentionally left your name off of the diary? Maybe you figured you would always keep it close, so why bother? Maybe you didn’t want outsiders knowing it was you who wrote it.

Then something happens or maybe a series of things, and you and the diary are separated somehow. Consequently, no one will ever know that it was your life depicted on its pages. 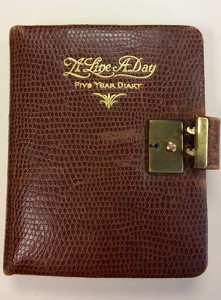 Or will they? Last fall, a woman called the Archives to say she had attended an auction and had bought a box of random discards from people’s lives for a few bucks. Inside was a diary, and its original keeper appeared to be associated with OSU. She wanted to donate it.

Once the Archives received the diary, we put our tenacious student assistant, Belle Teesdale, on the trail of determining who the writer was. She found out all kinds of things:

1. It was a young man who had some extended family in Harrisburg

2. He was a member of Phi Kappa Psi and somehow related to the Triangle fraternity

3. He took classes at OSU but also attended Dartmouth University

4. He had a very active social life, attending plays and movies, going out to dinner at the Neil House and other Columbus landmarks 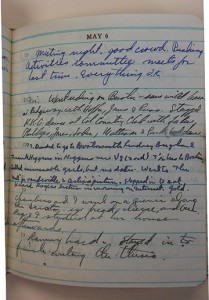 5. He was a bit of a “player,” in the modern vernacular: He seemed to go out with a lot of women during the diary’s five-year span. Even so, he was sometimes on the losing end of break-ups.

6. He traveled quite a bit, going west to California and across the ocean to Europe at different points.

Eventually, Belle figured out who it was, and so will you, after a series of tweets and Facebook posts over the next few weeks giving diary entries as clues. We start with this blog because it turns out the OSU Mystery Man was born on February 22, 1912 – 103 years ago, as of yesterday. We’ll end the series next month on March 20, revealing his identity and the larger picture of his life as an OSU student and beyond.