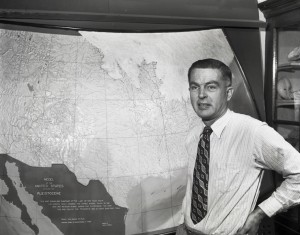 Richard Goldthwait next to a glacial map of the U.S., 1958

Richard Parker Goldthwait must have had ice in his veins, but not in the way you would think.

Goldthwait, the founder of OSU’s Institute of Polar Studies (now known as the Byrd Polar Research Center) was born on June 6, 1911, in Hanover, New Hampshire. He became interested in the study of glaciers at a very young age, working as a field assistant for his father, James, a geologist at Dartmouth College. He received his bachelor’s degree in Geology from Dartmouth College, and he earned his master’s degree (1937) and doctoral degree (1939) in Geology from Harvard University.

After working as an instructor and assistant professor of Geology at Brown University, Goldthwait moved to Ohio in 1944 to serve in the U.S. Army Air Force as a materials engineer at then-Wright Field. He started working at Ohio State in 1946 as an associate professor, and served as professor from 1948 until his retirement in 1977. 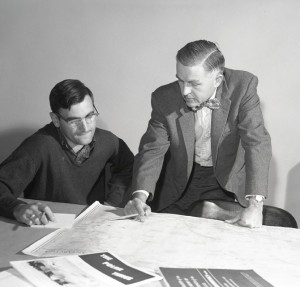 Goldthwait (right) and Dick Cameron look over a map of Antarctica, 1960

At the age of 25, Goldthwait began his own research into glacial geology and glaciology, and the next year, in 1936, he published the results of the first successful seismic sounding through glacier ice.  Much of his career was devoted to the study of the glacial history of Ohio, and he was one of the first to use carbon-14 dating in that study. He also conducted research on glaciers and glacial landscapes in Antarctica, Greenland, New Zealand, and Baffin Island, Alaska. Even after he retired, he continued to do field research, publish papers, edit books and organize sessions at professional meetings.

In 1960 he founded the Institute of Polar Studies at OSU, and he served as its director until 1965. (The center’s name changed in 1987.) There, he was known simply as “Doc G,” though he won numerous awards throughout his career (the Antarctic Medal from the U.S. Congress in 1968, the first Distinguished Career Award from the Geological Society of America  in 1986, to name a few. Mount Goldthwait in Antactica and the Goldthwait Polar Library of the Byrd Polar Research Center also are named for him.

Twelve Days: Herrick’s imprint on campus was past, present and future