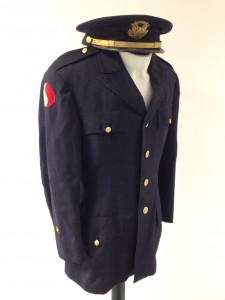 This summer, the Archives hosted several events for alumni who were interested in learning more about OSU history. We demonstrated this history through a number of items, including a World War II-era ROTC uniform, once owned by John Naddy, a 1948 graduate in Business Administration.

The uniform, worn by members of the Reserve Officers Training Corps, was one of a long line of such garments worn by OSU male students since the university was founded in 1870. At that time, land-grant institutions like Ohio State were required to provide military sciences classes. In 1880, OSU required all male students to take classes in military education during their first two years of University enrollment.

The outbreak of World War I had several Ohio State leaders concerned about the defense of the nation and the role of military education in that defense. What resulted came to be known as “the Ohio Plan,” which was co-authored by then-President William Oxley Thompson, General Edward Orton, Jr., (OSU Professor of Ceramic Engineering) Commandant of Cadets Colonel George L. Converse (Commandant of Cadets in the Department of Military Science) and alumnus Colonel Ralph D. Mershon. The Ohio Plan was incorporated into the National Defense Act of 1916, and it established the ROTC as a national program. 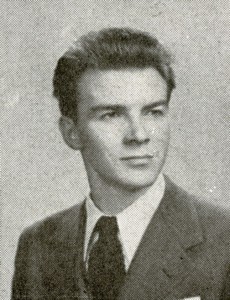 The Ohio Plan made military drill and basic coursework mandatory for all male students for their first two years. After that, they were free to stop training or to choose to enroll in a program that would earn them a commission in the U.S. Army upon their graduation. In 1945 the University added a Naval ROTC, and in 1946 an Air Force ROTC program was established. Military education was compulsory until 1960 when the University began offering other coursework options to fulfill the requirements.

As for Naddy, along with the uniform that he donated to the Archives in 2006, he wrote a letter giving some details about it: He bought the uniform in 1941 for about $28. With the uniform came two blue dress shirts, white gloves, a canvas belt with a brass buckle, and a black tie. It sounds like quite a bargain, except that Naddy was making only 39 cents per hour as a stockboy at a local electric supply store.

As an added bonus, Naddy related in the letter how he met his future wife: “In 1942 I met my future wife in a geography class. Professor Carlson said if any student has trouble seeing the board please move forward. She did. I did. That’s how we met.” According to the letter, as of 2006, they had been married 60 years.

Orange and black as school colors? No thanks, we’ll take Scarlet and Gray