On its 100th birthday, we celebrate Thompson Library’s humble beginnings

April 17, 2013 / drobik.5@osu.edu / Comments Off on On its 100th birthday, we celebrate Thompson Library’s humble beginnings

It’s hard to imagine what the Oval would be like without Thompson Library towering over its west end, but if the University’s first full-time librarian had had her way, the campus’ main library would have been located away from its apex, near where the Faculty Club now stands. Fortunately, former OSU President James Canfield convinced her otherwise:

“I was much interested in what Mr. Reeder told me of the proposed library building and in what you write about it: but you must not let it go off campus,” he wrote in a 1908 letter to Olive Branch Jones when he was Librarian of Columbia University. During his 1895-1899 tenure as OSU President, he had proposed putting the library in its current position, since it would be the heart of the University and deserved a central location. 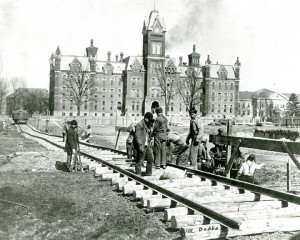 The Board of Trustees agreed with him, and in 1913 what was then known as the “New Library” opened. It cost $314,515 to build. To get the heavy stone and other construction materials to the site, the construction company used a railroad spur, which had been built in 1909 from the Hocking Valley Railway to the University’s power plant. It was used to transport coal and other materials to the power plant, first at Brown Hall and later at the McCracken Power Plant. It ran down the middle of what is now Woody Hayes Drive from Olentangy River Road.

(Today, a median filled with flower beds occupies the space taken by the tracks, which also were used to transport passenger cars for football games, particularly OSU vs. Michigan. The last vestiges of the railroad disappeared in 1970 when the power plant transitioned to natural gas from coal, and the spur was removed as part of the 315 highway construction project, which had originally been the path of the main railroad.) 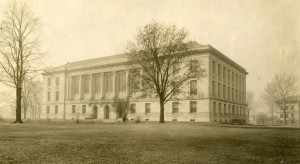 Before the “New Library” opened – on Jan. 6, 1913 – an ambulance from the Department of Animal Husbandry was used to move about 100,000 books to Thompson from Orton Library, which served up until that point as the main library. When it opened, the library had only three floors, two elevators, and no electric lighting. It was officially named the William Oxley Thompson Memorial Library, in honor of the fifth president of the university, in 1951, when its 11-story stacks were built. The Thompson Library now contains roughly 6 million volumes.

Parting thoughts from seniors past