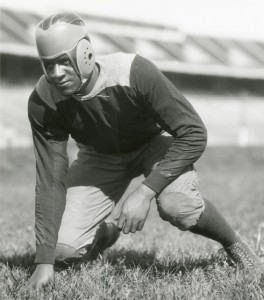 William “Big Bill” Bell was a standout tackle for the OSU football team, but his academic career off the field far outshone his performance on it.

Bell played for the Buckeyes from 1929 through 1931, and earned All Big Ten and Honorable Mention All-American honors his final season. But football wasn’t his only activity: He was a member, and Sergeant of Arms, for the African-American social fraternity, Alpha Phi Alpha, and he was a member of Varsity “O,” the Collegiate Council, and the Interracial Council.

His senior year, the Upper Class Cabinet of the OSU chapter of the YMCA tapped Bell to lead a new committee on interracial relations. In doing so, the Cabinet’s president, Wallace Hall, revived a then-dormant policy of allowing African-American members to become a member. In a Lantern article about Bell’s appointment, Hall said “Bell is a good worker, and I see no reason he should not be a member of the cabinet.” 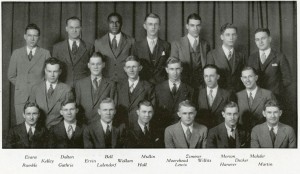 After organizing physical education departments at several universities, Bell ended his career as athletic director of Fayetteville (Alabama) State University where he assisted in the development of Fayetteville’s National Youth Sports Program, a summer organization for disadvantaged youths.

He died at the age of 81 in 1981 in Fayetteville. In Bell’s obituary, a former student of Bell’s at North Carolina said Bell “never said ’phys. ed.’ He always said ‘health and physical education.’ He wanted it to be a profession.”