January 30, 2013 / drobik.5@osu.edu / Comments Off on Perpetrator eluded police in perplexing OSU poisonings of 1925 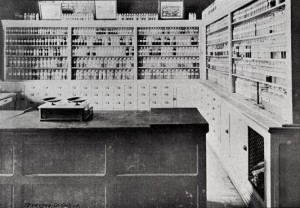 The dispensary in the early 1900s.

One of OSU’s most horrific unsolved mysteries is the 1925 strychnine poisoning incident that left two students dead and could have killed many others.

It was the last week of January in 1925, and like many winters, there were dozens of ill students lining up for medicine at the dispensary (the campus equivalent of a pharmacy). At that time, quinine was prescribed to relieve fever and aches and came in little white pills. The dispensary was busy and employed many students, and there was little professional supervision. It is believed that these contributing factors that allowed someone, intentionally or mistakenly, to mix strychnine pills into the batch of quinine pills. 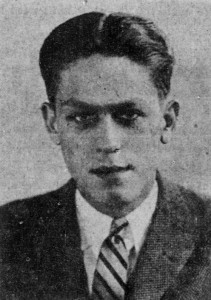 The first victim was Charles Huls, a 21-year-old senior studying journalism. He was the “big man on campus” type who was involved in many activities: the Makio, Bucket and Dipper and Sphinx, to name a few. On January 31, Huls had a tooth pulled, then went to the dispensary for cold medicine. He was found ill in his room at the Phi Gamma Delta fraternity house on 17th Avenue that night. Huls then developed convulsions and died.

A day later, David Puskin, a 20-year-old junior, took ill. Puskin had been feeling poorly before he sent his friend, Louis Fish, a pharmacy student, to the dispensary for medicine. On Feb. 1, Puskin got up, shaved and took a pill for his continuing cold. Within 20 minutes, he was dead.

At first, Huls’ death was thought to be from tetanus, and Puskin’s death was ruled to be viral meningitis. Officials even isolated Puskin’s friends and acquaintances to prevent an outbreak.

Then, other students became sick, including a sophomore football player, Timothy McCarthy. Lynn St. John, then-athletics director, heard about McCarthy’s symptoms and pressed College of Medicine Dean E.F. McCampbell to test the pills. The pills were found to contain pure strychnine, which prompted a police investigation.

In an April 1925 report, written by McCampbell, at least two other victims tested positive for strychnine poisoning and at least 10 strychnine capsules were found, hidden among the quinine pills distributed by the OSU dispensary.

Unfortunately, the investigation was unsuccessful in locating a perpetrator, or even a motive. The only arrest made was Louis Fish, the pharmacy student who had gone to the dispensary for David Puskin. Fish was allegedly grilled by police, but quickly released. President Thompson was said to be convinced that the poisonings were not an accident, but no more clues were forthcoming. In 2000, The Columbus Dispatch asked Dr. Park Dietz, a forensics psychiatrist for his opinion on the poisonings. Dietz felt that rather than an accident, a prank, or an attempt as mass murder, that the poisonings were likely targeting a single individual, with intent to murder that person and use the poisonings as cover. Dietz also said it is very likely that the actual victims were not the intended target.

The University investigation did change how the dispensary and pharmacy program at OSU operated. OSU became the first school in the country to offer a four-year program for pharmacy students. Tighter regulations and better training measures were put in place at OSU and quickly adopted across the country.

OSU not immune from flu epidemic of 1918