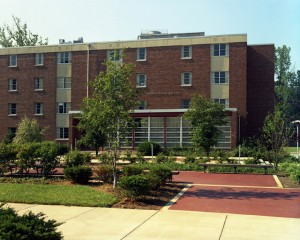 As you may have heard, the Board of Trustees recently approved a plan to overhaul North Campus, with particular attention to the residence halls. The $396 million plan is expected to increase campus housing for students, as well as add dining and recreation facilities in the area.  As a result, four existing dorms will be demolished: Blackburn, Haverfield, Nosker, and Scott Houses.  Since they will be gone soon, let’s reflect on their significance:

On April 6, 1962, the Board of Trustees dedicated a group of dorms on North Campus, including the four to be demolished. These buildings were going to alleviate the housing crisis the University found itself in during post-war enrollment boom of the ’50s and ’60s. What is special about these buildings is that they were named in honor of U.S. war veterans who were all Ohio State students or alumni and who had died during one of the major conflicts, from the First World War through the Korean War. The only two buildings on North Campus not named for a veteran are Drackett Tower and North Commons (Taylor, of Taylor Tower fame, was a veteran, but he survived and worked at Ohio State for many years after he left the service). The four dorms to be demolished are named for the following individuals:

John Thomas Blackburn, of Columbus, was one of four Ohio State men killed in action in 1941 during the attack on Pearl Harbor. He served aboard the U.S.S. Utah. A member of Tau Kappa Epsilon fraternity, he enlisted in the Navy in October 1939.

A native of Uhrichsville, Ohio, James W. Haverfield graduated from Ohio State in 1930. He was a member of Beta Theta Pi, and active in Scarlet Mask. He enlisted in the Navy in November 1940. He was reported missing in action in 1941 after the attack on Pearl Harbor, and he was declared dead just five months after he was called to active duty. A Navy destroyer escort vessel was named to honor him as well.

William C. “Bill” Nosker played three years on the varsity football team as a guard (1938-1940), and served as class president during his sophomore year (1940). He graduated in 1942 with a bachelor of science degree in Agriculture. In December 1943, he was deployed overseas and flew more than 30 missions before he died after a night-time takeoff on August 15, 1944, in Italy. He was awarded the Bronze Star for a mission over Romania, as well as an Air Medal, issued to those who distinguish themselves during an aerial fight. Nosker’s Air Medal had three oak leaf clusters, signifying that he had received this decoration three times.

Robert R. Scott was killed in action in 1941 during the attack on Pearl Harbor, while he was serving on board the U.S.S. California. A native of Massillon, Ohio, Scott was posthumously awarded the Congressional Medal of Honor—the first Ohio State student to be given the honor in either World War.

To learn about the other veterans and administrators the dorms are named for, check out Buckeye Stroll, our interactive map of campus: http://library.osu.edu/buckeye-stroll/.