A place of their own: Oxley Hall, the first women’s dorm

It may be hard to believe, but for many years in OSU’s early history, no female students lived on campus. Girls were expected to take rooms with local families or to live in boarding houses. Eventually, however, OSU women did get a dorm of their own: Oxley Hall.

The building was designed by a woman, who was an OSU alumna, to boot. Florence Kenyon Hayden was a former OSU student who had studied with then-University Architect Joseph Bradford. Her work was so good that Bradford suggested her to the Board of Trustees as the architect for the women’s dorm.

She got the job, although the trustees assigned her a male partner- Wilbur T. Mills – to complete the project. In a 1970 Columbus Dispatch interview, she said that she became fed up with Mills, locked him out of the office, and submitted her final plans for approval within the month. So apparently what we see today is Kenyon Hayden’s vision, although both she and Mills are listed as the official architectural team. After marrying a physician, she began designing medical facilities, for which she later gained some national attention. 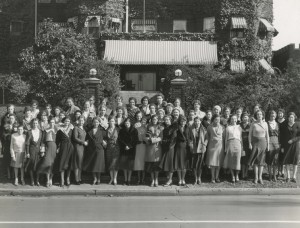 Construction began on the building in 1907; it was built in the English Renaissance style with a Spanish tile roof, brick exterior and limestone trim. The cost of the original structure is listed as $66,490.85.

Residents moved into the building in September 1908 and took a vote on what to name their new home. The Board of Trustees accepted their recommendation, and on November 20, 1908, officially named the building for President William Oxley Thompson’s mother (her maiden name, which is where he got his middle name).

Some fun facts about living in Oxley Hall as a co-ed: A single room cost $1.75 per week in room and board; residing in a double room cost $1.50. The girls did have staff to cook and to clean the public areas of the house. There were mandatory quiet hours Monday-Thursday from 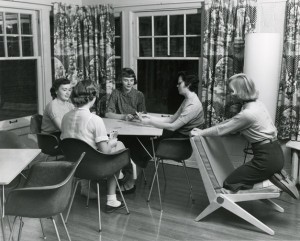 7:30 p.m. until 6:30 am. Girls could have callers on Sundays from noon-3 p.m., and from 5-10 p.m.; men were never allowed beyond the first-floor receiving rooms. Residents also had curfews, though those became less restrictive as the years progressed.

The building served as a dormitory until 1967, when it was decided that it was unsuitable as a residence hall and was leased to the University Research Foundation. The building was remodeled in 1989, and in 1991 the Department of International Affairs moved in, where it remains to this day.

Carl L. Dennison: the man behind the sweater

Buckeye-D : Putting a name to a (dozing) face