December 8, 2011 / drobik.5@osu.edu / Comments Off on Twelve Days of Buckeyes: Mirror Lake’s colorful past

(With this post, we begin our annual take-off on “The Twelve Days of Christmas,” but instead of riffing on the individual lyrics of this classic holiday song, we decided to offer up tasty treats about twelve events, people or places associated with OSU that – while they may not be well-known – make us thankful at this time to be Buckeyes. First up is one of our favorite spots on campus and one with a very interesting history: Mirror Lake.) 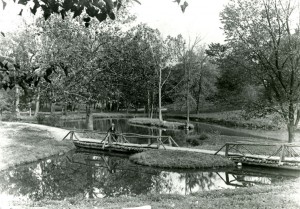 The first reference to “Mirror Lake” comes from the 1912 OSU yearbook, the Makio. However, the lake had attracted attention long before then. University lore says that the site for the campus was chosen partly because of a spring at Mirror Lake’s location that supplied water to the Neil Farm. Yep, people could drink out of it.

The natural spring that fed the lake was first threatened in 1891, when Columbus put a storm sewer through campus. (The sewer became a popular site for photographs at one point.) The spring dried up, but University officials stepped in after a tremendous public outcry, and for the cost of $600, and some supervision by a professional in mines and engineering, the sewer was rerouted and the spring began flowing again. At this time the lake contained islands, which were accessible from bridges. Swans, turtles, and giant goldfish lived in the lake. An annual Tug-of-War was held during May Week that usually resulted in the dunking of all players. 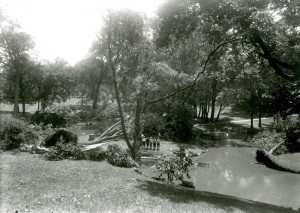 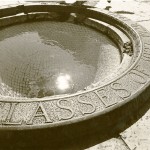 In 1918, a windstorm knocked down trees surrounding Mirror Lake and drastically altered its shape. Two years later, because of so much construction on campus, the spring dried up altogether, and again University officials sought to find a solution. The result was the memorial fountain (the class gift for 1927, 1928 and 1930) that stands today at the east end of the lake. The water was pumped from the Olentangy River to the fountain, but this created another problem: The water was sulfuric, and it stank, especially in the spring (no pun intended). No doubt romantic strollers avoided this area at that time. This also meant the end of wildlife in and around the lake. In the 1960s chlorine was piped in through the newly installed fountain to eliminate the smell. Eventually, the city of Columbus started supplying the water and does to this day. During the 1930s, the bottom of the lake was paved with bricks as part of a federal Works Progress Administration project, to better facilitate cleaning. 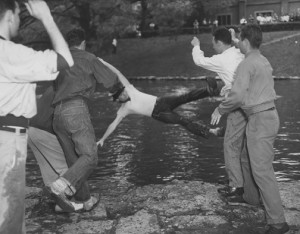 Mirror Lake has always attracted bathing, as it were, whether it’s been voluntary or not. Dunking has been very prevalent over the years and has occurred for many reasons other than May Week: to celebrate fraternity elections, to “tap” new members of class honoraries, or to punish freshmen caught without wearing their beanies on their heads. It had gotten so out of hand by 1957 that the University banned it that year after serious injuries were reported the year before. Jumping into Mirror Lake has had no such restrictions, and the tradition of taking a dip in anticipation of the upcoming Michigan football game has continued roughly 20 years after its inception in the early 1990s.

Mirror Lake also has served as a magnet for young lovers, even those who are fighting. In 1964, there was the case of a spat between an engaged couple. The woman removed her engagement ring during the argument, and her fiancé took it from her and threw it into the lake. The following day the girl arrived on campus in a raincoat and a bikini, and went swimming, trying to find her ring (why her fiancé is still unclear). University policemen asked her to get out of the lake, but as only “swimming” was against the rules, she was allowed in to look for the piece of jewelry. After donning a scuba mask, she found the ring and eventually married the fiancé.

Urban Meyer: Back at OSU

Twelve Days of Buckeyes: Ralph Mershon and the R.O.T.C.