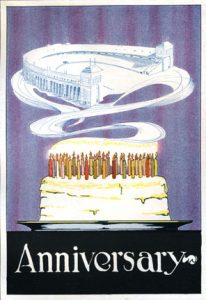 Official records, however complete, printed addresses, however glowing, cannot preserve the atmosphere of the Semi-centennial celebration at the Ohio State University. For there is in these the note of wordy ostentation and of pride, “cut-and-dried,” that does not reflect the warmth and the felicity of the occasion, intimately remembered.

“Jubilee Day,” October 13, was the curtain-raiser. The crowds were not large, but already the alumni homecoming wave had begun to flow toward the campus. Scores of the graduates were grouped in the shade of friendly and familiar trees beside the Long Walk over which the academic procession moved from the Library to the Gymnasium for the opening ceremonies. Other bevies of early reunionists were clustered in the Hollow, near the Spring, that day. The campus buildings received them constantly with the older professors as hosts. At Fifteenth Avenue, the main gate to the campus,. there had been erected a large “information tent” to meet the obvious need of many of the older graduates who were back for the first time in years. At all campus entrances were posted large signs pointing the way to alumni registration headquarters in Ohio Union where clerks worked in relays throughout the week in a futile attempt to register the homecomers. Literally hundreds of those who made the pilgrimage back to the campus were never registered-some, through their own neglect; many others, because they did not have the patience to stand in line at the registration booths during the crowded hours.

Certainly [no official address] was richer in interest than that of Doctor William Oxley Thompson, President of the University, who described the personalities and the service of the four past Presidents of the University, his predecessors. The presence throughout all the week’s exercises of Doctor William Henry Scott, the only living ex-President, who delivered the first invocation, was in itself a benediction upon the ceremonies.

No event on the week’s program excited greater pride than the opening exercise on the afternoon of “Jubilee Day,” when the representatives of the other great institutions of learning in America rose to deliver to President Thompson the greetings and the congratulatory messages accorded to the University in its fiftieth year. All present rejoiced in the happiness and graciousness of phrase with which the President acknowledged these witnesses to the honor and esteem in which Ohio State is held in the collegiate world of America…

Thursday, October 14, was given over mainly to educational conferences and addresses, with particular reference to the service of the land-grant college in American education. Doctor William F. Peirce, President of Kenyon College, was the presiding officer of the forenoon, with [other] Ohio educators on the speaking program. The afternoon session was under the direction of Doctor William J. Kerr, President of Oregon Agricultural College…

By Thursday afternoon the alumni had begun to descend on the campus as an army. Social events had been postponed as far as possible so that week-end visitors might attend the most of them. The first of these was the Golden Jubilee Reception and Ball, held Thursday evening downtown at Memorial Hall, which had been specially decorated by University artists for the occasion. The formal reception here was followed by dancing.

Friday, October 15, was probably “gala day” of the Jubilee. It had been set apart on the calendar of the celebration as “Alumni Day.” The speaking program of the forenoon was one largely of reminiscence, including Doctor T. C. Mendenhall, a member of the first Faculty and present Trustee of the University; Doctor W. H. Scott, former President and Emeritus Professor of Philosophy; Lowry F. Sater of the Class of ’95, a prime mover in University and alumni affairs for the past quarter-century; and Paul M. Lincoln, Class of ’92, President of the Ohio State University Association, official organization of the alumni. 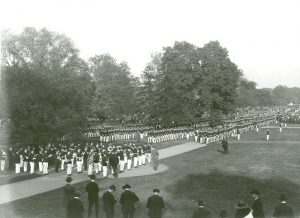 Nearly five hundred alumni were packed into the dining room of Ohio Union that noon for the Alumni Luncheon, while scores more, for lack of room and food, were turned away. Class spirit and reunion glee ran high. Doctor Edwin Earle Sparks, President Emeritus of Pennsylvania State College and a member of the Class of ’84, presided as toastmaster in an uproar of merriment and good humor. Speakers at the luncheon, omitting those who reveled extemporaneously on call of the toastmaster, included Doctor Thompson, Miss Charme Seeds ’15, and Professor William Lucius Graves ’93.

While the luncheon was still under way, the student military review on the campus Oval had begun, with long lines of undergraduate cadets, smart, spick-and-span in new uniforms, swinging by the reviewing stand. 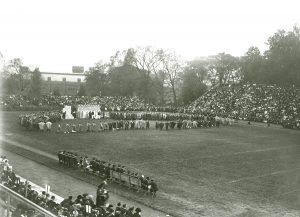 Next came the Alumni Procession, led by the Cadet Band from the steps of the old “Main Building” to Ohio Field. More than 400 graduates were in line, some of the classes in full costume and others with distinctive regalia of one kind or another. Down the Long Walk they paraded, cheering raucously, flaunting high their class banners. 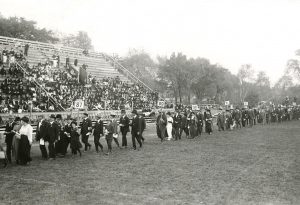 Then it was that the “old-timers” glimpsed anew the present and the future greatness of the Alma Mater when their own marching line, cheered by the thousands packed in the stands on Ohio Field, disbanded to make way for a magnificent pageant of the undergraduates portraying the past and picturing the future destinies of the University. More than a thousand students took part. The pageant theme was the struggle of early education in Ohio, the call to the citizenry of the State to support the movement for higher education, the cataclysm of World War and the brave response of the youth of Ohio, mobilized in the colleges, and the ultimate triumph of Ohio State as the standard-bearer of higher education in the Commonwealth.

Each succeeding event of Alumni Day seemed to draw larger crowds and arouse greater enthusiasm. The climax (though some there are who speak of it, remembering, as the “anti-climax”) was the Ox Roast and Barbecue.

From then on there was carnival. Student sideshows did a land-office business. The crowds crammed their way into the tents. Near midnight, the plaster model of the proposed “Ohio Stadium” was unveiled under spotlights, with Miss Eloise Fromme, a senior, to officiate as the “Stadium Queen.”

Saturday, October 16, concluding day of Semi-Centennial Week, marked a return to dignity of celebration, with alumni still in the major role. The forenoon’s program and closing ceremonies were in recognition of the graduates of the older medical colleges, which now have been merged with the University-Starling-Ohio, Ohio Medical University, and the others. Hundreds of these graduates attended in person the exercises in the Armory, which were presided over by President W. O. Thompson of the University…

The concluding event of the celebration was the football game on Saturday afternoon between the Ohio State University and Purdue University, resulting in a victory for the wearers of the Scarlet arid Gray by a score of 17 to O.

Throughout the week the campus was the scene of many reunions, conferences, and ceremonies. The dedication of the Orton Memorial Library was held on October 16, with Doctor C. White of West Virginia, President of the Geological Society of America; Colonel Edward Orton, Jr., and Professor John A. Bownocker as the principal speakers.